About Our Commercial Flat and Low-Sloped Roof Restoration

As a western or central Ohio commercial building owner, you know that Flat or Low-Sloped Roofs have certain problems generally associated with them. These problems can affordably be solved with roof coatings which are engineered to eliminate never-ending leaking, ponding, and rapid deterioration caused by the various elements which can occur with flat or low slope roofs.

Filbrun Enterprises uses Conklin Roofing Systems which have been applied to over 2 billion square feet of roofing throughout the United States since 1977. Conklin’s white roofs reflect the sun’s hot UV rays rather than absorbing them the way black roofs do. Conklin roofing systems and roof coatings have been proven to be energy efficient in some very intense situations and under some very intense scrutiny.

Benefits of a Roof Coating Restoration 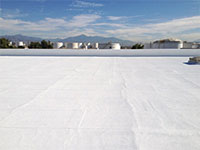 Elastomeric is an elastic coating that goes on as a liquid, then the acrylics dry to a seamless, bright clean, and modern coating that prolongs the life of your roof. It will expand and contract; in the summer heat, it will stretch. After dark, the membrane goes back to its original size. 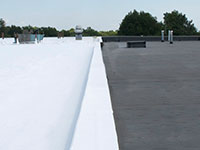 This is a complete waterproofing system that significantly improves the building's energy efficiency. Each problem area is systematically addressed during the restoration process. The entire roof is then sealed with a reflective finish coat that also cools the roofing surface, cutting cooling costs by 20%. 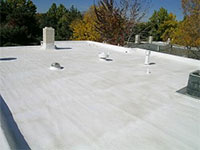 With the high cost of asphalt roofing, roof replacement is expensive compared to some coatings. Roll asphalt generally only lasts 10 years. You can add up to 20 years to that useful life.